Never Lose Your Sense Of Outrage

This post summarizes Lt. Col. Dave Grossman’s presentation titled “How Kids Are Learning To Kill” from the August 6, 2014 Securing & Surviving The Active Shooter Epidemic Seminar. It is meant to convey his ideas and opinions without endorsement or criticism. Therefore, the ideas and opinions in this post are not necessarily those of Gibson. 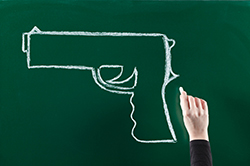 How many students have been killed by school fires in the last 50 years?

What about school violence in the United States?

This alarming tally represents a recent trend, one that isn’t limited to the United States. The first double homicide by a student didn’t occur until the 1970s. The 1980s only saw two of these incidents, one in Finland and one in the United States. In the 1990s, with Columbine and other schools, the number of these shootings began to explode. Every few years, the United States sets a new record for school killings. And the shootings have occurred around the world, including incidents in Germany, Canada, Norway, Japan, Australia, and South Korea.

In the history of the world, children have never committed crimes like this. Argue all you want about gun laws. It’s not just what’s in kids’ hands, it’s about what’s in their heads.

Who Are These Killers?

We’ve raised the most vicious generation of kids the world has ever seen. The good kids are really good. But the bad kids are very bad; the worst we’ve ever seen.

These kids are not just desensitized to violence, they are conditioned to associate reward with human death and suffering. Our children eat dinner in front the television watching violence on the news, they earn points playing violent video games for participating in violent acts with the bloody consequences unfolding in graphic detail before them, and they eat popcorn and sweets watching extremely violent movies. Like Pavlov’s dog associated a bell with its dinner, our children associate graphic images of violence with the satisfaction of food and reward.

They want notoriety. And to get this, they need a body count. So they look for helpless victims who can’t fight back; they look for people who are not armed.

If a potential victim might fight back, the killer could fail. That’s what these killers fear: failure. They are looking for situations that give them the best chance of succeeding in their mission: to kill as many people as they can.

With that in mind, what can we do to stop them?

We Can Deter Them

First, keep the doors locked. Control who walks into your building. It seems like a simple concept, but it is one that is overlooked time and time again. Controlling who enters your building is a deterrent.

Second, use window film that prevents glass from shattering when shot or struck. At Sandy Hook, the door was locked; the killer shot out the glass in the door to get in. Window filming—at approximately $20 a square foot—can prevent that.

Third, allow interior doors to be locked from the inside quickly. During the Sandy Hook massacre, a teacher had to step out of her classroom to lock her door and she had to use keys to do it. While she fumbled with her keys to lock the door, she was confronted by the mass murderer and killed. Relatively inexpensive magnets and other products are available to more easily and safely lock down a room.

Fourth, perform lockdown drills. Lockdown drills show teachers and students what to do if a killer were to enter the building. These drills can mitigate harm. But if you don’t teach them what to do, you’re teaching them to do nothing.

Finally, arm somebody. There has not been a multiple homicide in a school when there is someone present who can shoot back. Unarmed security guards are not a deterrent; they should be armed. Even arming teachers is an option. Utah and Texas have armed teachers for a decade and neither state has had a school shooting. Having someone on the scene that can shoot back is a deterrent.

We Can Detect Them

These young killers generally leak information before an attack. The leak could be a comment in the hall, a text message, or a post on social media. And there are almost always kids who know about the killer’s plans. So for internal threats, tip lines—such as www.wetip.com—can be made available for kids to report possible threats. And kids can be taught about indictors and be informed on how to report them.

The best indicator of an external threat, on the other hand, is surveillance. The killer will watch and scout the location. For example, a killer could spend time sitting in their car in the school parking lot. They could be watching to see when people go in and out or when a security guard leaves to determine the best time to attack. If a school monitors their parking lot they can help detect these suspicious behaviors.

We Can Defeat Them

When deterrence and detection fail, we need to be prepared to defeat these killers. Lockdown drills and specific instruction about how to confront a killer can help kids get out of a bad situation alive.

The “Run, Hide, Fight” approach is widely accepted by the Department of Homeland Security, FBI, and many law enforcement agencies. Teaching your educators, students, staff, and employees this method can help prepare them to survive an attack.

Telling teachers they have the authority—or even responsibility—to fight back can make a difference. This doesn’t necessarily mean arming teachers. For example, when a killer reaches through the glass to open a classroom door, the teacher’s natural response may be to try to keep the door closed. This method is not effective. If the teacher were instead instructed to hit the killer’s arm or hand, to use a chair or desk to hurt the killer, the killer might stop. When a young killer is confronted with their own mortality, it becomes real, and they may stop their attack.

This is not right. This is not normal. This is not business as usual. Killings like this never happened in human history, but now they are everywhere. Never lose your sense of outrage about these killings. Never lose your sense of outrage that we have to talk about locking school doors, conducting lockdown drills, arming teachers, and fighting back against armed and violent children. But don’t let that prevent you from doing what we need to do to keep these incidents from happening, to keep our kids safe, and to keep our kids from killing.

To learn more about Lt. Col. Grossman, visit his website.

The Importance Of A Good Relationship With Your Occupational Facility

How Do You Respond In An Active Shooter Event?