Shelter From The Storm: Protecting Your Home Against Lightning Strikes 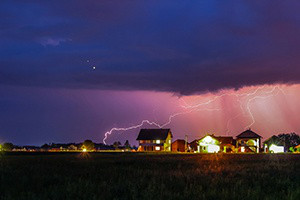 Spring brings rising temperatures, extended daylight, and blooming flowers. Though the cold weather and icy road conditions of winter are gone, it’s important to remember that the spring and summer months have their own hazardous weather conditions that require preparation.

Summer and spring are the most common months for thunderstorms—and where there is thunder, there is lightning. According to the National Weather Service:

Despite these facts, lightning remains a severely underrated risk.

The majority of damage caused by lightning strikes is due to the huge surge of electricity they produce. Lightning looks for the quickest way to reach the ground, and often this is through your home’s wiring or plumbing. Once in a structure, lightning can travel through the electrical, phone, plumbing, radio or television reception systems, and any metal wires or bars in concrete walls or flooring. This intense heat surge through the wiring can result in a fire. Fires caused by lightning strikes are particularly dangerous, because in some instances they are not immediately apparent but will burn slowly within your walls.

The Insurance Information Institute has reported a steady decline in the number of lightning claims since 2011, but states that the cost per claim has risen nearly 56% due to the increase in number and value of consumer electronics within homes.

It’s important to ensure you, your loved ones, and your belongings are protected should a lightning strike ever become your reality. You don’t want an oversight in your insurance coverage to leave you responsible for the entire cost of rebuilding your home or replacing damaged items.

Protecting Yourself & Your Property

During a storm there are several precautionary measures you can take to help decrease your risk of lightning-related damage or injury. These include:

Coverage for a lightning strike is generally built into your homeowners insurance policy and includes coverage for damage caused by fire, as well as for damaged or destroyed wiring and electronic devices. If your home is struck by a lightning bolt, you and your family may be displaced for the period of time it takes for the home to be examined and rebuilt. Your homeowners policy covers those expenses as well. Talk to your insurance advisor to determine the extent of the coverage you need. When purchasing coverage for the structure of your home, remember to keep in mind what you will need in the event that you have to rebuild.

In lightning damage claims, it’s important to determine if the loss was, in fact, caused by lightning. A direct strike will leave physical traces, but other objects within the strike zone can sustain damage without revealing any physical evidence whatsoever. Calling a professional to review damaged items may be necessary.

With the rapid increase in the number and value of consumer electronics in homes, such as flat screen televisions, in-home sound systems, computers, gaming systems, and new smart home technology, it is more important than ever to be sure you have proper coverage against lightning and other storm-related risks.