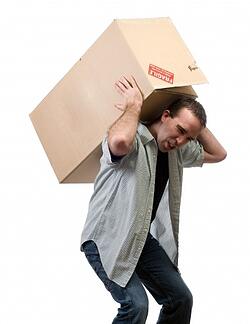 Whether in the workplace or at home, leading by example is a powerful motivating force. As a parent, you teach your children by example. As a supervisor at work, you can have a great, positive influence by not only your actions but also your expectations.

In the areas of workplace wellness and risk management, the old saying, "Do as I say, not as I do," is tantamount to shooting yourself in the foot, organizationally speaking. As an organizational leader, you should not only practice what you preach but also lead from the front, by example. And finally, as any qualified leader must know, you should not expect what you don't inspect!

My Poor, Aching Back

According to both the U.S. National Institute of Health (NIH) and OSHA, low back pain represents the number one work-related medical condition in the country. It's also one of the most common reasons for individuals missing work and visiting their doctors. Here are a few more disturbing statistics regarding lower back problems:

Causes And Prevention Of Lower Back Problems

The spine is composed of 24 vertebrae, each separated by cushioning discs, which surround and protect the spinal cord and associated nerves. The spine is generally described as being made up of three sections:

It's the five lumbar vertebrae and their separating discs that are the source of most lower back pain complaints. This part of your spine, responsible for carrying the bulk of your body's weight, can be stressed due to a combination of habitually poor posture and use of poor mechanics when lifting objects. Incorrect lifting, which is a learned behavior, can be responsible for causing hundreds of pounds per square inch of pressure on individual lumbar discs, leading to one or more of these discs becoming herniated.

Proper lifting, which is also a learned behavior, can prevent the buildup of pressure in the lumbar discs. Since lower back pain is a chief complaint in the workplace, it would seem prudent to ensure that workers, especially those responsible for lifting as part of their regular duties, be taught and checked on for the use of proper lifting techniques. These include:

An important rule for workplace safety is to think before acting.Before attempting any kind of heavy lift, analyze the situation and ask questions such as:

It's also important to use the same proper techniques, in reverse, when setting a heavy load down. Most people are aware that they should lift with their legs and not with their back, but sometimes they may need to be reminded. As a leader in the workplace, your observation and guidance can be an important aspect of providing increased workplace safety.