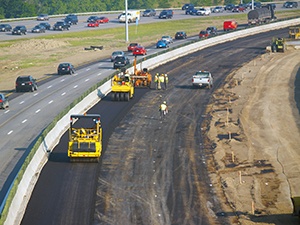 National Work Zone Awareness Week (NWZAW) is upon us. This year’s theme is Work Zone Safety: Everybody’s Responsibility. With warmer weather comes roadwork season. As we hit the road, it is important we are aware and alert while driving in work zones. This protects workers and ourselves.

While many work zone safety campaigns are aimed at protecting workers, motorist are also at risk for being injured or killed. In 2016, fatal crashes and fatalities in work zones exceeded the previous three-year average with 683 fatal crashes, 765 fatalities. More than half of those fatalities were motorist. While driving in a work zone, actively practice these simple safety tips to keep you and others safe:

Each year, more than 100 construction workers are killed and over 20,000 are injured. When minimizing traffic collisions in work zones, worker injuries are minimized. However, fatality data indicates that workers being struck by a motorist in a work zone account for only half the vehicle-related fatalities among highway workers. The other half are caused by: runovers/backovers by dump trucks, collisions between vehicles, and being caught between/struck by equipment or objects. The following tips will help keep workers safe in work zones:

When driving, or working, within a work zone, the most important take away is to stay focused. Be aware of your surroundings to help avoid an accident, injuries, or death. Stay safe this summer on the roads because safety is Everybody’s Responsibility!

Creating A Sustainable Culture For Innovation And Engagement

Is Your Company Vulnerable To Expense Report Fraud?