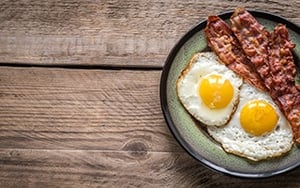 Last week, we heard the story of a chicken and a pig, and learned about the first of two leadership qualities that mark bacon-level commitment.

Today we’re going to learn about the second quality of bacon-level commitment: Sacrifice.

The most impactful leaders sacrifice for the good of their organization and their people. They are humble and empathetic. They exist to serve the organization, and despite sitting at the peak of the pyramid, they approach each day as though the pyramid is inverted.

To successfully lead the organization from this position, you must be willing to sacrifice three things for the good of your people...

It is not uncommon for leaders to use their authority and take advantage of the privileges afforded to them out of comfort, arrogance, or other selfish motivations.

During the infamous training camp held in Junction, TX, the local hardware store had only one fan in stock. Despite the epic drought and heat wave, Coach Paul ‘Bear’ Bryant declined to have the luxury of a fan. As it was portrayed in the movie, Junction Boys, he stated, “I’m not going to be the only one with a fan.” He was willing to sacrifice comfort so his team would see him enduring the same conditions as they had to face.

Many leaders feel it is their job to make people happy. They seek to be liked and they find validation in favorable popular opinion. Committed leaders are willing to sacrifice popularity to do what is right for the people whom they serve.

Prioritize the following in your decision-making to avoid chasing popular opinion:

It is important to procure feedback from your people, both internally and externally, but be careful not to make your decisions only based on that feedback. Martin Luther King, Jr. said, “A genuine leader is not a searcher for consensus but a molder of consensus.”

Often, there is an air of importance surrounding leaders, and there should be. Leaders are important. They shape and influence people. They see things others can’t. They bring things to the table that others don’t. Yes, an air of importance around leaders is rightfully existent.

In the movie, We Were Soldiers, Colonel Hal Moore is faced with an important decision on the front lines…does he engage in what is likely a losing fight or does he retreat to the command area to further strategize on how to win the greater battle (something he is uniquely qualified to do)? Despite the Colonel’s willingness to die, Major Sergeant Plumley advises him that without his leadership, the battle will be lost and rest of his men likely killed in the process.

Colonel Moore’s leadership was critical to the U.S. winning the Battle of Ia Drang; however, he did not place that importance on himself. The generals did by choosing him lead. Sergeant Plumley did by guiding him and protecting him. The battalion did by respecting his leadership, obeying his orders, and following his example.

Reflect on these questions...

Bacon-level commitment requires sacrifice. You cannot merely sit in the comfort of your chicken coop and lay eggs. You must get uncomfortable, make the difficult decisions, and lay your pride aside. You must not only serve your people but serve alongside your people.

The risk is lackluster leadership. So, give up ego for influence. Pursue greatness over appeasement. Lay aside authority for legacy.

You have a choice on how you lead…like a chicken or like a pig.

Do you want to be a bland leader or are you willing to get a little greasy and be a meaty, salty leader that makes everything better?

Brian is a Consultant in the Employee Benefits practice. He works closely with clients to help effectively manage their employee benefits, build a culture of safety, and employee wellness. With over 10 years of experience as a human resources leader and business owner, Brian helps businesses create clarity and proactively address the risks they face.

What You Need To Know About Form 5500