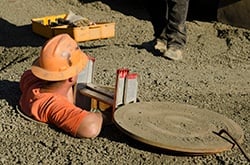 Crawl spaces, sewers, boilers, manholes. Individuals working in confined spaces such as these are exposed to life-threatening physical and atmospheric hazards.

On August 3, 2015, OSHA implemented a new rule on confined spaces for the construction industry. This rule is similar to the general industry requirements which have been around for over 20 years, with some slight modifications to make it more suited for construction. This new standard is intended to prevent injuries and deaths by both eliminating and isolating the hazards of confined spaces. In fact, OSHA estimates the new rule will prevent approximately 800 serious injuries annually.

"This rule will save lives of construction workers. Unlike most general industry worksites, construction sites are continually evolving, with the number and characteristics of confined spaces changing as work progresses. This rule emphasizes training, continuous worksite evaluation, and communication requirements to further protect workers’ safety and health."
— Assistant Secretary of Labor for Occupational Safety and Health, Dr. David Michaels

How Are Confined Spaces Defined?

A confined space is one which:

What Does The Standard Require?

This new standard requires employers to determine, by a competent person: what kinds of spaces their employees are working in, what hazards could be present, how those hazards can be made safe, what training should be provided to workers, and how to go about rescuing a worker. If you have employees working in confined spaces, take time to read the final rule to ensure you are meeting all of requirements.

How Does The New Rule Differ From The General Industry Rule?

From the general industry rule, OSHA has outlined 5 key differences in the new construction standard:

The Mystery Box of Management

Career Wellbeing: Why You Shouldn’t Underestimate It