While many of us think of Memorial Day as the start of summer, it most importantly is a day to remember those who died in active military service.

Memorial Day was originally called Decoration Day. In 1868 Maj. Gen. John A. Logan established Decoration Day as a time for the nation to decorate the graves of the war deceased with flowers. It was to be observed every year on May 30th.

The first large observance of Decoration Day was held that year at Arlington National Cemetery. During the celebration, former Union Gen. and sitting Ohio Congressman, James Garfield made a speech. Afterwards, 5,000 participants helped decorate the graves of the more than 20,000 Union and Confederate soldiers buried there. 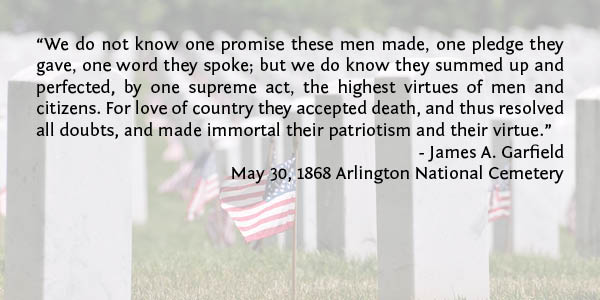 Arlington National Cemetery is the final resting place for more than 400,000 active duty service members, veterans, and their families. On Memorial Day, the U.S. Army Military District of Washington conducts a Presidential Armed Forces Full Honor Wreath-Laying Ceremony at the Tomb of the Unknown Soldier. This ceremony is always attended by either the President or Vice President of the United States.

For more than 60 years, the 3rd U.S. Infantry Regiment (The Old Guard) has honored America's fallen heroes on Memorial Day. Every year they place an American flag at the headstone of those buried at both Arlington National Cemetery and the U.S. Soldier's and Airmen's Home National Cemetery.

On Memorial Day, we want to thank the men and women of our Military and honor those that gave their life for our country.

Change Is The Law Of Life