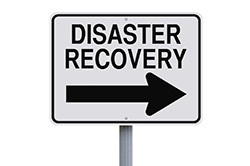 Thank you to everyone who has been following Gibson's #DisasterReady story. Our journey officially began in September 2014. Don't get me wrong, we had things in the works. In fact, I was part of Gibson's "original" disaster recovery team. We built a 3-inch three ring binder of vital information that we finished in April 2008. We proudly placed those binders on the shelves of about 10 of our people who were identified as key in the event of a disaster. And then they sat. They sat there through a gas leak that evacuated our main location (as well as multiple city blocks), through winter storms that shut down the roads, and through a power outage that took several blocks in South Bend down for one of the busiest weekends of the year.

As I stated, it's not like we weren't working on things. We were deploying laptops and communication systems to enable us to effectively communicate with our people. We were making key systems cloud-based so we could basically work from anywhere. We were committed to finding ways to always be there for our clients, even if a disaster were to strike. But quite honestly, we were still piecing together our business continuity plan. We had made it a technology initiative rather than making it an agency initiative.

Does that sound familiar for your business? Did your IT department draw the short straw and business continuity landed in their lap? IT is critically important in your business continuity plan, but a key thing we learned is that making your IT department the champion of your plan may not be the right thing to do. We learned someone needed to not only understand, at least at a basic level, the various business segments, but also needed to be a good project manager to keep it moving and bring those segments together.

The 3-day power outage I referenced above was the proverbial straw that broke the camel’s back. It took down 4 of our offices, in 4 different counties, because key technical systems were still housed in our main office. Our leadership team had a good discussion, which culminated with a profound statement: we would NEVER be closed! Take note of this....you must have the buy-in of your key executive team or you will not be able to get traction for your business continuity plan.

Our COO identified me as the champion for our plan. He then signed us up with a disaster recovery firm and made being #DisasterReady a key, strategic goal for me for the coming year. I checked out our firm and found their website was pretty cool. I could enter key information into the website and it would populate the plan. After a little work with IT and filling out some other "stuff," I was feeling great about the plan. It was pretty doggone easy as a matter of fact. Until I downloaded the plan that was built…

It was about 75 printed pages and I realized I was in trouble. I couldn't build the plan myself as I had originally thought. As I read through the template, I recognized I would need the help of our middle management group - those people who understood the inner-workings of their segments of our business. If you're taking notes, this would be another critical point...it takes a village. Yes, you need a champion - someone responsible for the end product and making sure the project keeps moving - but there likely is not a single person in your organization who can build your plan by themselves.

We spent the next 10 months or so building our plan and in September 2015 we announced to the world....ok, a few hundred people.....at our risk management forum that Gibson was #DisasterReady. We told the story of how we got there. But our story doesn't stop there.

Once we had the "final" product, we had a number of mini disasters. There was a day with 3-4 hours of an up and down phone system, resulting in us having to re-evaluate how we communicated with our people in the middle of a disaster. There was the loss of a key person within the main components of the disaster plan that required an update.

And after conducting drills with our various business segments this past winter, changes needed to be made. There's another of those noteworthy moments....you must test your plan. When testing our plan we discovered key flaws, especially in how our personnel thought about the disaster plan. The drills weren't always taken seriously – people were coming into the office when things got tough. One team had to conduct the drill three times before we deemed they had "passed.”

Following the drills we ended up on our 5th revision of the plan since "finalizing" it in September 2015. This summer, all segments were held accountable to review their specific plans to ensure any changes in key personnel or processes had been updated. Later this fall, they will do it again - and again next winter, and....I think you get the picture. This is a living, breathing document. It's a plan that doesn't get put on a shelf and forgotten. It is the roadmap Gibson will use any time a disaster strikes - no matter how big or small.

Gibson is proud to say we are #DisasterReady and we are NEVER closed. We will always be there for our clients. We live and breathe our mission to Protect What Matters Most and our journey to disaster readiness has ensured we will continue to fulfill it!

I Will Either Find A Way Or Make One