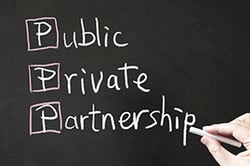 There has been a lot of press about P3s as of late, especially in Indiana.

A P3, or public private partnership, is a service or business venture funded by a partnership between a government and one or more private companies.

With the continued stress on governments trying to either maintain or expand services and infrastructure in the midst of budget constraints and often inadequate or declining tax revenues, the idea of being able to get things done with the help of the private sector is intriguing.

State legislatures first started considering P3s in order to privatize a public function or service. More recently, however, the private partner has provided upfront financing for a public works project, and also has been involved in the design, construction, operation and/or maintenance of the project. The latest example of this in Indiana is section 5 of I-69 from Bloomington to Martinsville.

The ability of a governmental entity to participate in a P3 is governed by law and Indiana has put several of these laws in place over time. For most federal and state projects, there are statutory requirements for the contractor to provide a surety bond as security for the project. There is sound public policy supporting these requirements under the federal Miller Act, the state Little Miller Acts, and the laws of many municipalities. A payment bond guarantees that subcontractors, suppliers, and workers on the job will be paid if the general contractor does not or cannot pay them. The mechanic’s lien, which is utilized as an initial line of protection on private projects for payment, cannot be used on public projects. A performance bond guarantees the public entity and its taxpayers that the construction contract will be completed.

For traditional procurement methods (i.e., not a P3), the Indiana Little Miller Act would require the contractor to obtain payment and performance bonds for any project over $200,000. However, if the project is let under one of Indiana’s P3 laws, the public entity is given discretion on whether to require any bonds and to also set the bond amount. This leaves a possibility that, depending on how the P3 agreement is structured, contractors and workers on the project might not be fully paid or the project itself might not get fully completed. Enter Section 5 of I-69.

The Indiana I-69 Section 5 Project is a $325 million road project that was let as a P3 and is thus not subject to the Indiana Little Miller Act. Rather than requiring a 100% payment bond, the Indiana Finance Authority accepted a 5% payment bond and set the performance component at only 25%. This means that of the $325 million in total costs, the bond only secured payment to subcontractors and suppliers in a total amount of $16.25 million. From a performance perspective, there is only security in the amount of $81.25 million.

It gets complicated, but basically the developer of Section 5 is very close to being found in default by the State due to being behind on payments to contractors on the project. The main design/build contractor on the project, Isolux Corsan, who was also linked to the developer’s ownership, essentially filed for reorganization protections. The risk here is that the developer cannot complete the project, cannot pay all of the subcontractors fully for the work completed, and the State is left with a partially completed project. Having stronger bonding requirements on P3 projects could have eased this risk and shifted the burden to a surety.

Most states that have enacted legislation authorizing P3s in the last 5 years have included a bonding requirement. Others have amended existing P3 laws in order to require bonding. Some states have not yet authorized P3s as a procurement method.

A P3 is just another way to deliver a public works projects. Although a private partner is going to construct Section 5 of I-69, it is still in the best interest of the public to have substantial security that the infrastructure will be completed and that all of the contractors and workers involved with the project will be paid.  All subcontractors, suppliers, and workers should be on notice that the protections they are afforded on traditional public works projects via a payment bond might be compromised with either no bond requirement or a bond that is only a fraction of the contract value. The Indiana legislature should carefully consider its P3 laws and the associated bonding requirements. Construction is a risky business, and the risk is no different if the project is a P3.

Bill is a principal at Gibson. He is an integral member of the construction team and the surety practice leader. In addition to elements of insurance and risk management, he is responsible for overseeing in-house analysis and financial statement underwriting, working with staff and clients on bid requirements and specification analysis, and meeting with clients' accountants and surety representatives. His construction-specific knowledge and expertise compliment Gibson’s strong construction team and bolsters the ability to bring value to all types and sizes of contractors.

Deer-Vehicle Accidents And Your Auto Insurance