Four Decision-Making Styles And When To Use Them 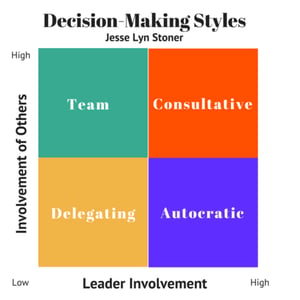 Sometimes leaders make bad decisions or harm team morale by making autocratic decisions without involving others. And other times they waste their team’s time by unnecessarily involving them.

How do you know when and how much to involve your team in decisions? Sometimes the answer is pretty obvious.

You don’t need to call a team meeting to decide to order pencils for your office. On the other hand, if one of your direct reports has the authority to make decisions about office supplies, your taking over might not be appreciated.

You have four choices on how to make decisions and when to involve others.

Communicate Which of the Decision-Making Styles Will Be Used

Outline a clear decision-making process, such as CRISP Decision-Making and be clear with your team about which decision-making style is being used. If people are going to be involved in a decision, make sure they know which of the decision-making styles you will be using – whether they are being asked to consult or if they have a real vote. When asked for an opinion, people often assume they have a vote and can feel misled if they discover later that is not the case.

When people know ahead of time what their role is in the decision-making process, they are less likely to resent or undermine a decision that doesn’t go the way they wanted.

You might start out with one style and then decide to change styles. For example, you might want to make a team decision but discover there is too much conflict to achieve consensus. If you change the decision-making style, it is important to inform your team.


1. Is this your decision to make?

If you believe the person or team responsible for this decision is not capable of making a quality decision without your involvement, discuss it with them and determine what decision-making style is appropriate. If a decision is required and you don’t have time to contact them or they are unavailable, you should get to them as soon as possible to explain why you went around them. Avoid taking back decision-making authority. If you do this on a regular basis, you will be viewed as a micro-manager and resentment will build.

2. Do you have access to the needed relevant information?

Do you know everything you need to know to make an intelligent decision? Do you have the necessary expertise?

If so, and if support for the decision is not needed or is guaranteed, use an Autocratic Style. It’s not necessary to gather your team to discuss where to hang a picture in your office.

The danger is that sometimes we don’t know what we don’t know. If this is a mission-critical decision, it’s worth using a Consultative Style to make sure you’re not missing any important information that would affect the quality of your decision. (See question #4)

3. To what extent is acceptance necessary for successful implementation?

If successful implementation depends on the understanding and acceptance of others, it is to your advantage to involve them in the decision early on and use a Team Style, even if you believe you already know the best decision.

Otherwise, you might save time during the decision-making process, but will pay the price during implementation. The more others are affected by the decision, the more they should be involved.

A good consensus process, where team members set their egos and personal needs aside and focus on the mission, will result in a higher quality decision. And as a result of the process, team members will develop a deeper understanding of the issues and great commitment to the decision, ensuring smoother and faster implementation.

4. How great is the impact of the decision on accomplishing the team’s mission?

What is the complexity and scale of the impact of the decision? As complexity increases, the likelihood that you know everything needed to make a quality decision decreases. Use a Consultative Style. As the scale increases, the likelihood that acceptance of others is needed increases. Use a high-involvement style – Team if possible, and if not Consultative, with broad and deep input.

What if you don’t have time for involvement? Shouldn’t that be a consideration? Indeed, if the building is on fire and smoke is coming under the door, it doesn’t make sense to call a group together to discuss options. However, most situations are not as urgent as they seem.

We have all had the experience of being in a hurry and making a decision we later regret. The same thing can happen with teams. It’s important to be aware of the potential for bad decisions when under an intense deadline, and consider the short-term benefit of a quick decision vs. the long-term consequences of poor implementation and needing to redo work.

In keeping with our ‘What’s The Risk’ format, CEO Tim Leman shares his thoughts on Jesse’s blog:

Misusing these decision-making styles can lead to poor decisions, as well as a lack of commitment from your team. Leaders who stick in a single quadrant are setting themselves up for trouble. There is no one best style to use – it will depend on the situation. Take time to understand the different styles and where they are appropriate. This will lead you and your team to more effective decision-making!

Jesse Lyn Stoner is a former business exec, consultant, and author of several books including the international bestseller Full Steam Ahead! Unleash the Power of Vision, co-authored with Ken Blanchard. Over the past 25 years Jesse has worked with hundreds of leaders using collaborative processes to engage the entire workforce in creating their desired future. Her clients range from Fortune 500's to non-profits worldwide, including Honda, Marriott, Edelman Public Relations, Skanska, SAP and YPO to name a few. She writes an award winning leadership blog and is published and quoted in the Harvard Business Review, Forbes, and numerous other journals and magazines.

Connect with Jesse on LinkedIn and Twitter. Read more by Jesse on her blog.